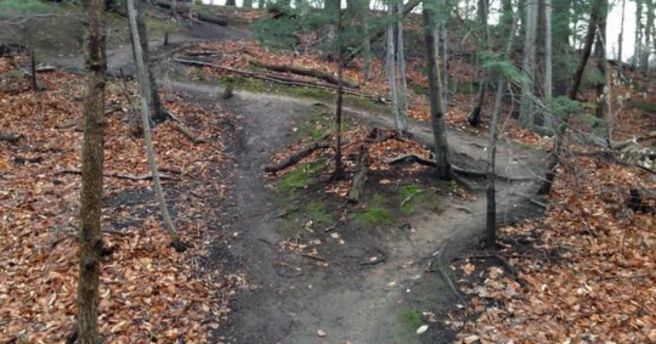 This will be a short race report, because the Webster Trail Classic is not quite as intense as some of my longer runs, and there were no major realizations or injuries that took place. But to stay in practice, I figured I’d write this up quickly.

Flour City Raceworks puts on two races: this one, in its third year, and the Ossian Mountain Run at Swain Ski Resort. Because this is a short-lived race, it’s about my only chance as a relatively recent runner to say I’ve participated in an event every year. In fact, the first year of the Webster Trail Classic was not only my first trail race but trail run of any type. I was hooked on my very first jaunt on the trails.

Webster has three neighboring parks, and this race hits all three. Webster Park is full of pine trees and scenic campgrounds, Whiting Road Nature Preserve has mostly flat trails with equal parts oak trees and open grassy areas, and Gosnell Big Woods Preserve has some singletrack and a lot of open area. That the parks are so close makes them perfect for a race like this, with 10 miles being completely sufficient to hit most of all three.

Webster Park had a lot of downed trees from a major wind storm earlier this spring. But despite all the rain we’ve had this year, the trail was in very good condition. And sometimes it’s fun to scramble over trees (and under one). The only other real challenge of this race is the vast field in Gosnell. It’s a loop through the grass, and in hot weather like last year, it can be brutal. But this year, it was only demoralizing, as this stretch seems to go on forever.

I started out faster than I normally like this year and fell in easily behind another runner. That’s my preference: to find someone going an ideal race pace and follow along, because I’m not good at pacing myself. I talked to my pacer a bit at the field and then passed her as she let the vast, open, grassy run get the best of her. Two other people were passed on this part of the race as well. People really hate that field.

Toward the end, I caught up with another runner I know who is typically much faster than I am. She was struggling physically, so I spent the last mile and a half talking with her and encouraging her to keep going. She needed the distraction, and I did too. I felt like I was struggling prior to this at the pace I was keeping, and I was all alone, so having someone to chat with helped significantly. And even though I could have passed her at the end, I stayed just behind her at the finish.

This is a fun, inexpensive, no-frills race. It’s perfectly marked (the RD indicated several hundred flags on the course), and there are homemade cookies at the end as motivation. Plus, these are very runnable, fun parks. Even the hills are short enough to be entirely runnable. I finished just a few minutes faster than last year, but as with my last race, I felt like I enjoyed the experience more. So that’s my goal this year: not necessarily to be faster, but to be happier during the race and suffer less.

Here’s hoping I can keep running this race every year! And maybe I’ll convince myself to run the ski resort for Ossian again. Maybe.