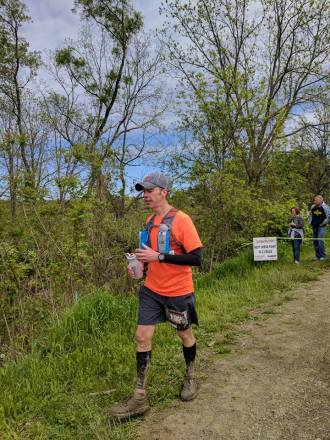 Last year, my training partners were preparing for the Ontario Summit trail marathon in early June. But I wanted to run Sehgahunda, a well-known area trail marathon (billed as an “ultra” at 26.3ish miles) down the east side of the gorge in Letchworth State Park. It was to be my first marathon, and who knows if I’d ever be able to run another? In my mind, I wanted to run the race with cache.

I finished Sehgahunda last year, despite temperatures in the low- to mid-90s for most of the race. It was brutal, and my time of 6:30 was nothing to be excited about. But it was my first marathon, and I was so happy to mark a major item off my bucket list.

Skip ahead a year, and I have run two more long races – the Rochester marathon and a 50k trail race. But Sehgahunda was calling me again, and this year my training partners were running it. We trained together through cold and endless mud all winter, and despite the mental challenges detailed here in depth, I was physically ready.

Or so I thought, anyway. A nasty bout of cold or flu knocked me out of commission for over a week and still hasn’t fully left my system. My calf injury that almost derailed training last year was back and bothering me worse than ever. I didn’t really feel prepared in the week leading up to the marathon. But, as often happens, I showed up to the starting line feeling the excitement and nerves, adrenalin pumping through my system, and I was ready.

The big differences between last year and this year were obvious. First, it was much cooler. Barely 50 degrees to start, it maybe got up to the upper 60s. Last year, I survived by stopping at each of the eight mandatory check points (CPs) to refill my water and scoop ice in a buff around my neck. This year, I was in and out of the CPs immediately, stopping to refuel at only two of them and saving myself plenty of extra time for the trail.

The other big difference was the trail itself. Last year, we were in near drought conditions, though there was still dense mud on the offshoots to the CPs. This year, we’ve had nearly historic levels of rain. The main trail itself was not bad, despite dipping down to cross water or run-off nearly 100 times over 26 miles. There was mud, sometimes thick, but the main trail held up very well. The offshoots, however, were a different story.

These open, grassy paths were required to get to marathon distance, so the check points were mandatory. They were narrow and featured two-way traffic, and some were close to a full mile each way. Worst of all, they were full of thick, deep, pudding-like mud that reeked of raw sewage. It was bad enough when you splashed through and kicked mud up on yourself; when a passer ran through, you were liable to get muddy up to your face.

But these offshoots are always the acknowledged worst part of the race, so rough conditions were expected. The race itself was excellently run. Women start at 7:45, getting an extra 15 minutes on the 8-hour cutoff. Men start at 8 am, and the relay teams (running as two- or four-person teams) started at 8:30. I took off a bit faster than last year, but I felt comfortable, and I fell behind two other runners who kept up a good pace and offered some welcome chatter. So I figured I would bank a little extra time in the early sections. 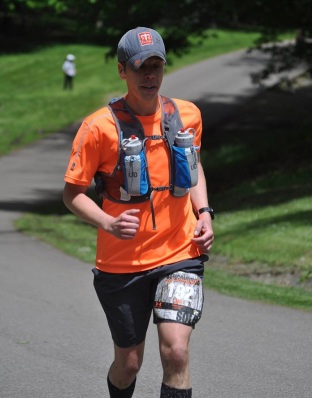 The first CP is 6.5 miles in, and I went in and out quickly, high-fiving a few friends as I passed them on the way back. The CPs have some advantages, despite the poor conditions and too-narrow path. For one, they’re uphill on the way out but downhill on the way back, so you get a boost of confidence and energy when you leave them. And you pass people regularly, nearly always with a “good job” or “keep it up” that is, for me, the best part of trail running.

CP 2 is only 2.5 miles further, but the run to CP 3 is nearly 7 miles. Altogether, it’s over 15.5 miles to CP 3, and everyone considers it a major accomplishment to get to this one, the busiest CP of the route, with the next relay point and plenty of room for spectators. That stretch from CP 2 to 3 feels very long, and the uphill is painful, but the volunteers at this race are always good and eager to help, never more so than at CP 3. I came in to some cheers from my spectating friends, and I got them to help me refill my Tailwind. Two orange slices, and I was out much quicker than last year.

After CP 3, the remaining five CPs are no more than 2.5 miles apart and sometimes just over 1.5. You can easily run CP to CP, which helps with the mental strain of running a marathon. I was mostly on an island at this point, as everyone had stretched out considerably. I was passed by the runner who sat with me on the shuttle bus, and we had a good conversation. Then I passed him as he struggled with his nutrition and fell back, but we encouraged each other on.

Mostly, I’m reminded of how amazing trail running is by the people I pass or who pass me. There’s almost always a good wish or word of encouragement, even from those who run with headphones. Even the relay folks had good things to say, knowing we’re all in the struggle together.

My one big complaint was the two women who ran together, blaring terrible pop music through a Bluetooth speaker. I don’t like music when I run trails, but if you do, wear your headphones. Don’t force others to listen to your music, especially loud. I’m in the woods, enjoying a beautiful day, and I have to hear your music for a long time before I catch up to you and long after I pass. That is not okay; loud music should be a disqualifying offense.

But back to the trail. Mile 18 is a hard one, uphill the full way, and the offshoot to CP 6 (the last relay point) was as bad as I remembered from last year. Rocky and difficult, this offshoot was a mile long. The relay people had made up the 30 minutes by this point, so they blew past you going the other way. And this last stretch for them was the easy leg, with only 4.5 miles, so they were less accommodating in the narrow sections. On my way back down, recharged by the downhill and knowing I was almost done, I came back to the main trail and complained audibly to the runner behind me when it immediately turned left and went steeply uphill.

“Oh, come on, it’s just a fun run in the woods,” said the young woman as she blew past us and ran up the hill.

“Says the relay runner!” I replied loudly. How bad could this hill seem to someone who started on a one-mill downhill and had only 4.5 miles to go? For us, it was intimidating. I didn’t mean to be rude, but she looked back and saw us trudging up and apologized profusely. I thought it was funny.

With about 2.5 miles to go, you break out of the woods on a rough and rocky logging road. It’s mostly uphill here, and the miles are truly getting to you at this point. There was no easy running path on the road, but eventually you hit the last CP and turn on to a much smoother gravel/rock road dubbed the greenway. This goes on, mostly flat, as far as you can see. I saw one man far ahead of me, occasionally walking and running, and there was no one behind me until, with barely a half mile to go, I was passed by a struggling runner. This section is demoralizing, but it’s not hard, and finally the yellow gate is ahead.

It’s at this point that you come back out on the road and wind through the parking lot to the finish. And the first stretch of that road is a short but very steep uphill section. Still, people are watching, so you have to run it, and I chugged up it with my head down, willing my feet to keep going. My friends were cheering and yelling, and I hit the apex, wound back around (and passing the runner who powered by me on the greenway), and there was the finish.

The clock said 5:35, and I was pleased to be so much quicker than last year, but I forgot to deduct the 15 minutes for the women’s early start. So I actually finished at 5:20, more than 70 minutes faster than last year. And, more importantly, I enjoyed the run this year so much more. The temperature was a big part of it, but I was struggling less in every way, and I appreciated the people and the scenery more this year.

Afterward, wearing my Sehgahunda sweatshirt and arrowhead medal, I hung out with my friends by the finish and cheered on the runners for several hours. There was copious amounts of beer and plenty of people to cheer. And now, several days later with enough time to think back, I’m still on a bit of a high at the accomplishment. Though this wasn’t my first marathon like last year, it’s still new enough to me to be empowering. It was wonderful to have more friends there to cheer and drink with, and the event was so much fun. Even though my legs are still sore and training has to continue for a 50k in a month, I feel like a major milestone was met. I was faster than expected and felt better than I imagined. It was a pretty damn good day.

One thought on “Sehgahunda (Race Report)”