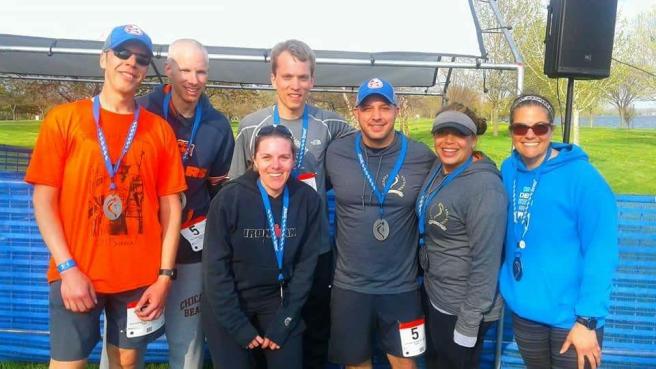 They say the course around Seneca Lake in the Finger Lakes of New York is precisely 77.7 miles. I think that’s awfully convenient, but it sure looks good on a sticker and makes for a good seven-person relay event!

I was a last-minute fill in for the captain of a team that has been running this relay all six previous years. Turns out, two other teammates had to drop as well due to family issues, so there were three newbies on the team this year. Our brilliant team name: Still Chafing After All These Years. Paul Simon was the cover model on our shirt. Pretty clever!

Geneva, NY, the starting point of the race, is about an hour from Rochester. And our wave began at 6 am, which means we had to leave about 4 am to get there in time and prepare for the start. It was going to be a long day from the very beginning. Still, I was the seventh of seven runners, which means I got to dress warm and doze in the van for a few while while other people ran in the cold pre-dawn hours.

And it was cold and damp. A few degrees over 40 and gray and dreary, we shivered every time we got out of the van. My leg was about 9:45, and it was 4.1 miles all up hill. I shivered in shorts and the team t-shirt, waiting for my relay predecessor to come in. And it took at least a mile to warm up enough to not be miserable.

Generally, this is a beautiful view from every leg. Seneca is a gorgeous lake, with mostly vineyards and farmlands between it and the road. But I just kept my head down and plowed ahead up the road. Some of my fellow runners were running fast due to the relatively short distances of each leg, and I wanted to prove my worth. 4.1 miles of uphill running ended in a fast sprint to the finish and…waiting for Runner 1 who was still in the bathroom. Oh well. Finished the first leg with a 7:20 average.

At one point during the second legs, we were at an exchange point in a park, making PB&J sandwiches at a picnic table. I was shivering so badly that it was hard to get the sandwich into my mouth. And yet an hour or so later, the clouds broke and the sun came out, and the weather rose into the 70s. Suddenly, it was a beautiful day, and the lake glistened. Spirits soared.

My second leg was only a 5k, and a lot of it was downhill. I averaged about 7:15 on that one and felt pretty good despite my allergies acting up and interfering with my breathing.

As everyone else ran their third leg and relaxed for the day, I had to keep waiting. There’s good and bad about being the last runner, I guess. The very last leg started along a busy highway, and there was no breeze away from the lake. By this point in the day, everyone had spread out enough that I passed just two or three people and had little to enjoy in the way of scenery until I turned into Seneca Lake State Park back in Geneva.

There was about a mile of pitted park road to go, and it was nearly right on the lake. Quiet and peaceful, with just one or two parkgoers in the area, I plodded away until finally the finish was in sight. You wind around the finish area and pick up your teammates – all looking clean and rested at this point – to run through the finish arch together. I averaged 7:30 the last leg, but by that point no one really cared. I blame the team run for the slowdown!

All in all, we couldn’t have asked for better weather. Rochester dealt with torrential rain and hail that morning, and we had no rain at all. The sun even came out and warmed us up. There was beer and chili at the end, and finally we headed home.

The original team put in expected paces and was expected to run an average of 9:05 minute miles. With three substitutes, we averaged 9:06. Safe to say there wasn’t a letdown! And even though I won’t be back on the team next year (barring another injury), I enjoyed my fill-in! It was a day of brief runs interspersed with a lot of riding in a smelly van, eating peanut butter-filled pretzels and potato chips, and laughing. We cheered on every runner and finished strong.

There’s a lot of comradery in a relay race like this. And unlike Ragnar, which challenges your ability to function on no sleep, Seneca 7 is over in a realistic timeframe and has pretty good bling to boot! I ran faster than expected (and my legs suffered for it the next day), but it was fun to feel challenged and have other people to run for. Here’s hoping I get to do this one again some year!