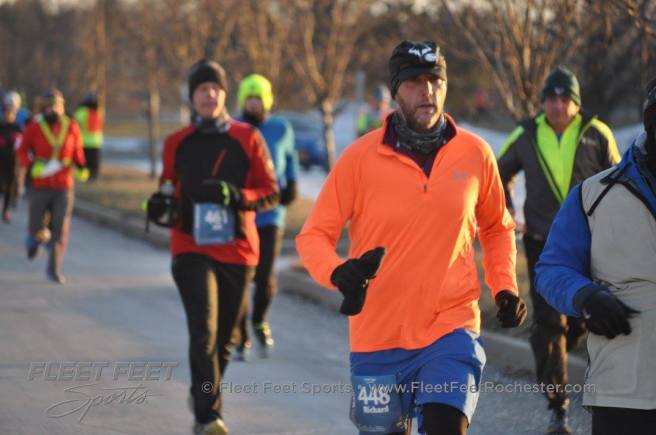 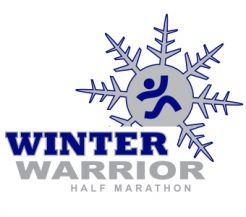 The idea of a long winter race – in this case a half marathon you can run solo or as a relay – is a good one. People need motivation to get out and run in the harsh Western New York winters. This type of race motivates people to train while allows for a controlled environment that can be kept as snow- and ice-free as possible.

Fleet Feet/Yellowjacket Racing add extra motivation through the Four Seasons Challenge, in which you sign up for a half marathon in each of the four seasons, starting with this one and ending with the Rochester Marathon (which can also be run as a full) in the fall. You pay less for each race if you sign up for all four at once, and you get an extra medal piece that combines to one cool piece of bling.

I completed the Four Seasons last year, but I will admit it was a good year for running. The two harshest weather races – this one in January and the Shoreline Half in July – both featured mild weather. In fact, last year’s Winter Warrior is still my personal record (PR) for the half at around 1:45.

If anything, my biggest complaint last year was that the race was boring. You start at 4 pm and run four 3-ish mile laps around an office park, weaving in and out of driving lanes and hitting the street for a short distance. It obviously has to be controlled to keep traffic out and maintain conditions should snow and ice be forecasted. The lap structure also allows for just one water stop and an easy relay transition. There’s one very slight hill you hit four times, and although the wind can be biting, it is only in your face for about a mile and a half (four times).

But this year was hard, and I didn’t do nearly as well. I had three immediate and obvious problems going for me:

The sun was out before the race started, and that kept the temperature up to about 22 degrees F. But once the sun went down (dusk after the first lap and dark for the other two), the temperature dropped as well. It was cold, hitting about 12 degrees with a gentle but biting breeze.

As explained in my previous post, I am a wimp in the cold. I was dressed reasonably well – two layers of gloves and socks kept fingers and toes warm, and multiple layers kept my legs and torso comfortable enough. The problem was the wind, which made the damp base layer freeze as the temperature drop and conform to my skin uncomfortably, and the exposed skin of my face. I would pull a buff over my mouth and nose for a few moments to warm up, then lower it, only to have it freeze from the moisture of my breath.

I ran in colder temperatures last year, but last year’s winter was mild one, and only 5- to 7-mile runs were so extreme. I get the feeling this year is going to be a much colder and harsher one. I have already ordered a jacket to wear over layers to help keep warmth in and wind out.

The Thursday before this race, I was running with my local group of brewery runners, and I slipped on a patch of ice. My knee hit the sidewalk hard, and I had to limp after the rest of my fellow runners for a bit. It swelled up and turned black and blue, but it really wasn’t hurting much at all other than to touch.

Then I started running. No problems at all for the first two or three miles, and then it just throbbed the rest of the time. I could ignore it for a while, and then I had to stop and just rub it and let it rest for a minute or two. This obviously killed my time.

Not much I could do about the knee, I guess. Injuries happen, and this one isn’t particularly severe. It was, however, frustrating to stop (and get questions about whether I was alright), and it hurt quite a bit to start again. It was also far too cold to stop for more than a minute or two.

I know how early to get up for a typical race or run so that I can drink coffee, eat breakfast, wake up satisfactorily, and take care of that most-important pre-run activity: the bathroom break(s). With late-day races, it’s hard to know what to eat and when. One of my friends who ran it said he didn’t eat enough. Apparently I ate too much.

The entire first loop, I had that unfortunate and uncomfortable sensation of running shaking the digestion track. If you run, you probably know the feeling. It’s not easy to run and clench at the same time.

The port-o-johns were at the start, and I made a bee-line for them at the end of the first lap. It was another delay, going along with my sore knee, and it put me behind my friends. I was never able to catch up.

Those are the easy and true excuses for a painful run. The realistic and harder-to-admit reason is that I let those three things get to me mentally. I was struggling mentally because I was struggling physically, and that’s human nature. But it meant that the last lap, over 10 miles in when you’re cold and tired and bored out of your skull from running lap around an office building, I had a hard time motivating myself to keep running. The cold helped keep me from walking for more than a bitter minute or two, but I knew I was checking out.

And that’s what bothers me most about this run. I finished it (about 2:10, which wasn’t nearly as bad as I feared), and there’s something to be said for getting through adversity to just finish the damn thing. But that’s the glass-half-full, optimistic view, and I am not that person. I am the glass-entirely-frozen, pessimistic worrier, and I took a hard slog of a race in which I had to stop and walk here and there as a personal failure.

But that is running, I guess. You take the good runs and feel buoyed by them, and you take the bad runs and learn from them. I couldn’t change the weather, although I could acquire better cold-running gear. I couldn’t change the knee pain. I could have eaten better, I suppose, though I’m not sure how or when. All that being said, the one thing I would probably do different is wear headphones and listen to music.

Because four laps around an office park’s parking lot in the cold and dark for over 13 miles is really, really boring. And even the thoughts of macaroni and cheese and a friend’s house for beer sharing after couldn’t motivate me enough to power through this year’s Winter Warrior.